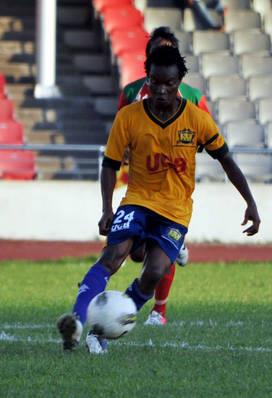 Former Flying Eagles winger Ikechukwu "Chu-Chu" Okemmiri has surfaced in Bangladesh to kick start his professional career with a move to Sheikh Jamal Dhanmondi Club a sports club in Dhaka, Bangladesh based in Dhanmondi.

The former Nassarawa United, Lobi Stars and Wikki Tourists midfielder is already enjoying life in the Asian country, as he revealed to allnigeriasoccer.com.

"Coming here is really a great move for me, better than playing in the Nigerian league because over here the league is a lot better in terms of organisation and structures. The stadium are packed full and the clubs are so better organised. The fans adore you everywhere you goo. I have only been here for a short time now but I am loving it.

"At first the club did not want to sign me because the officials said my stature was not what they wanted but they just played me in one friendly game and I showed what I got and the club owner took it personal and said I must be signed and since then I have become a favourite with the fans. However, I am a very ambitious player and I hope to move on from here as soon as possible. ''