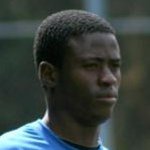 Nigerian youngster Abayomi Owonikoko Seun has made three substitute appearances in the Ukrainian championship for Volyn including Saturday's 1-1 draw with Metalurh Donetsk.

The 20 - year -old forward has admitted that he is facing a period of adjustment in Ukrainian football following his arrival from Georgian team Zestafoni in the summer transfer market.

''In Georgia, (speaking of Gagra) I usually had more playing time in every game. Scored more, and I am now facing a period of adjustment, trying to understand the characteristics of the championship. Difference between the Georgian and Ukrainian championships is impressive. Highly skilled players here much better,'' Seun was quoted as saying by football.ua citing the official website of The Crusaders.

Off the field, Seun, who played in the qualifying rounds of the UEFA Champions League this season for FC Zestafoni, says he has been able to cope because the people of Ukraine are warm and friendly.

He said: ''I do not have any problems. Walk around the city, people are very friendly, smiling, especially when they see that I am a player of Volyn. English language they understand a little bit, sometimes it is possible to say something in your language. And this is a great city, easy to get used to it.''