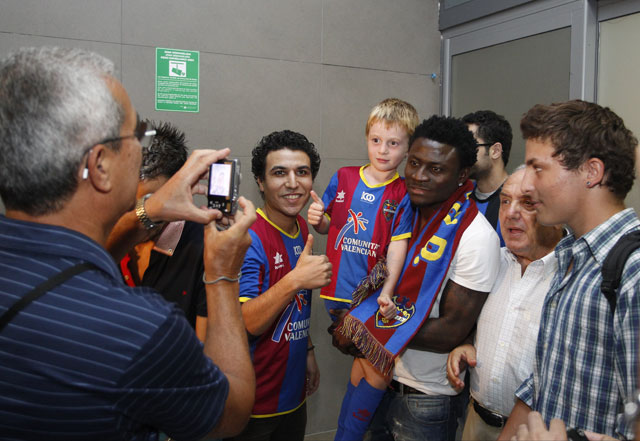 Obafemi Martins lasted the entire duration of the game as Levante won their second straight game on the bounce, beating Getafe 1 - 0 away at the Alfonso Perez stadium on Sunday.

Before the match, the one time FC Ebedei talent was interviewed by Spain's number one sports daily Marca.

Marca: What does Obafemi mean?

Obafemi Martins: ''The king loves me.''

Marca: How did you know about Levante?

Obafemi Martins: ''In a match against Real Madrid I was amazed to see Cristiano Ronaldo beaten in a sprint by an old man. I asked myself who is he, and how could he run that fast? It turned out it was Ballesteros, who I know well now and is an incredible player to still be playing.''

Marca: What surprised you most about your new team?

Obafemi Martins: ''The dancing in the locker room. Juanlu  is tremendous.''

Marca: Where did you play?

Obafemi Martins: ''On the streets of Lagos, without shoes, with friends. My first team was the FC Ebeidei. At age 16 I joined  Reggiana.''

Marca: Did you go hungry as a child?

Obafemi Martins: ''Never, my family is not poor. We were seven children, four boys and three girls. One of them died a year ago, also played: Partizan Belgrade in, among other clubs. My mother bought rice, cooked and sold. My father  soon retired.''

Marca: You spoke of school - was much, little or nothing?

Obafemi Martins: '' I did not finish, I did not like. I learned on the street and in Europe. I speak my dialect, English and Italian. And soon speak Spanish. My destination was football. I will always remember how my parents were crying when I went to Italy.''

Marca: And you did not cry?

Obafemi Martins: ''After three months I wanted to go back. Toldo, goalkeeper, also helped me, never forget. My first phone he bought it. "Here, with this call to your house, he said. Was a small Nokia. Vieri And, ha, ha. One day I was presented with a clock of 8,000 euros. And Cuper: the coach who cared about me more. I was called to the Inter first team from the reserves.''

Marca: What happened in Kazan?

Obafemi Martins: ''No I adapted to Russia. The cold? There are days at 30 degrees below zero, but  it came a time when I feared I would disappear as a player. I decided to set aside the money and strive to be a football player again. Levante appeared I saw the danger, the abyss: the club know that Martins will fight forever, every day and always. On the 28th fulfill that, 28 years, I have time, but I'm not starting.''

Marca: '' You must be one of the three fastest in the league, how fast do you run the 100 meters?