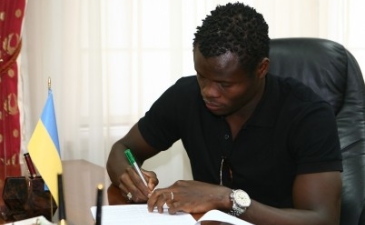 Dynamo Kiev left back Taye Taiwo has been banned for three matches by the Ukrainian League Body following an off the ball incident in the last round of matches against Metalist Kharkiv, writes football.ua  citing the official website of the Ukrainian vice - champions.

The Nigeria international was punished for hitting Xavier Clayton in the 12th round game played on October 20 at the Olympic Stadium, Kiev.

''On the basis of the reply of the Committee of Arbitrators of the FFU, additional match referees report and video, FFU FTC found that: in an episode that took place 20.10.2012, at the 42nd minute of the match of the 12th round of the championship Dynamo Kiev - Metalist Kharkiv between players Taiwo Taye (Dynamo) and Clayton Ribeiro Xavier (Metalist) T. Taiwo committed a violation against the footballer Javier - waved a hand of player who is not holding the ball ...

''......Thus, on the basis of the set, the FTC said it is necessary for the FFU to ban T. Taiwo from three competitive matches.,'' an extract of the judgement read.