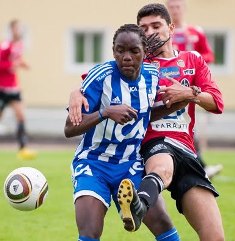 ''We will be inviting some interesting players, both young and promising, and some already established, '' says sports director Michael Cold Brook to the official website.

Lawal will train with IK Brage from November 5 to 6, and then play a friendly match against Sandvikens IF the following day.

The 21 - year - old played six games for Syrianska in the 2012 campaign. He is a winger who can use both feet.