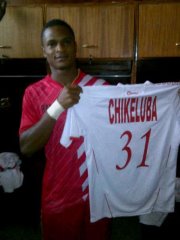 The end never seems to come to the unending twists in the transfer of Chikeluba Ofoedu to 1461 Trabzon of Turkey as the Turkish club have absolved themselves from any culpability in the transfer and instead fingered the Nigeria Football Federation in the matter.

Mr. Abdul-Maliq D'friq of Activity Chambers who represent Oak Zeel FC in the matter informed allnigeriasoccer.com that the Turkish club sent them a fax, denying any wrong doing, and laying the blame squarely on the door of the NFF as they had done everything above board.

" We received a fax from the President of 1461 Trabzon and in the fax they said that they worked on information provided by the NFF in the players TMS (Transfer Matching Scheme). We made further inquiry only to learn that the NFF cleared the player based on the a clearance issued by the Enugu State FA, stating that the player was a free player. This raises a lot of doubts and question marks.

"How can the NFF clear a player who has played in the Premier League based solely on a letter from a state FA without consulting the Nigerian Premier League. If they had as much as written the NPL for clarification on the status of the player, they would have discovered that he belongs to our clients and was loaned to Rangers by our clients.

"Also, how come the Enugu FA claim that the player is a free agent, yet a fee is paid for his loan? Just because they are the state FA of Rangers they want to use Rangers to receive loan fees for a player they say is a free agent thereby robbing our clients. That is definitely not the way things are done.

"The club have absolved themselves of blame, and clearly the NFF acted laxly here but what is important is that the situation is rectified, because if it isn't rectified soon we will do everything legally possible to ensure it is", he told allnigeriasoccer.com.