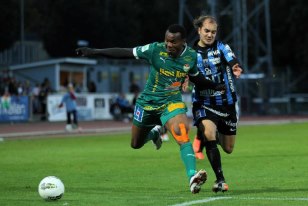 There are hints that the 21 - year -old ex Mowoe Babes, Warri player is weighting the options available to him ahead of the resumption of the winter transfer market.

Omoh told allnigeriasoccer.com: ''My contract expires next year and the management of Dalkurd have approached me to renew for an additional two seasons. I spoke with them last week and told them to take things easy as I have to think about their proposal.

''There are some Premier League teams that have shown interest in having me for next season. Since they have not tabled an official bid to my club I can't mention their names.''

Omoh, who is primarily an offensive midfielder, scored 7 goals in 22 league matches this past season.