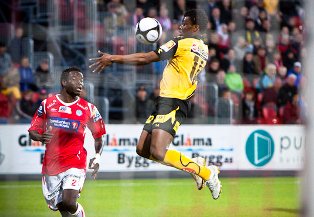 Edwin Eziyodawe has targeted a return to Europe in the January transfer window. The 24 - year -old has been without a club for close to a year after his expired contract with Norwegian club Lillestrom was not renewed.

The attacker showed so much promise at the beginning of his LSK career, scoring 7 goals in 24 games in his first full season. However, due to the emergence of a certain Anthony Ujah and poor physical condition, he failed to establish himself in the squad in the final year of his contract and was shown the exit door.

''By His grace, I am looking towards the winter transfer market to sign for a new team. For now my future destination is confidential, but for sure it's Europe. I am training on  my own. Every morning I go to the gym, do some strength work, then later go for good football training,'' Eziyodawe informed allnigeriasoccer.com.

He  went further: '' I did not want to be in a hurry to sign for a new club after I left Lillestrom. Because I have learned my lesson for not being patient. It cost me a lot at Lillestrom. After my operation I was in a hurry to get back to the field.''

Finally, Eziyodawe, who spent three seasons in Norway, concluded by paying tribute to the supporters of Lillestrom.

''I miss everything about Lillestrom, especially the city. The supporters were fantastic and treated me like family,'' he said.