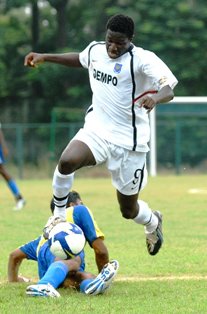 Striker Ranti Martins etched his name in the annals of the history of Prayag United, as he notched five goals and created three others in the 10 -1 annihilation of United Sikkim on Saturday.

Martins has been outstanding in the I - League this campaign. The former Dempo ace has bagged eight goals in his last three matches in the championship.

In his post match comments to allnigeriasoccer.com, Ranti Martins said: ''I would love to dedicate these goals to the Almighty God, teammates and well-wishers because they have all been very supportive.

''I signed for Prayag United despite interest from other teams in the I - League because they are very ambitious. I think they are one of the best teams in the league.''