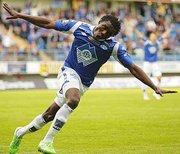 With a game to spare, Molde secured their second consecutive Norwegian title on Sunday, thanks to Daniel Chima's 59th minute goal in the 1-0 win against  Hønefoss BK.

Strømsgodset IF, the nearest challengers for the Tippeligaen crown, lost their composure losing 1 - 2 away to Sandnes Ulf. MFK now have an unassailable four - point lead going into the final round of games next weekend.

''I feel so great scoring the match winner, never been this happy before. The way I celebrated the goal shows I am very delighted to score. On a personal note, I did not really start the season well, but the climax was great for me.

''Before the start of the season, we had set for ourselves the target of retaining the title, which we have achieved. Molde can continue to be a force in the Norwegian League because of our unique style. We don't chase the ball, we knock it around,'' a delighted Chima told allnigeriasoccer.com.

Daniel Chima, who recently extended his stay with Molde until the end of the 2014 season, has appeared in 23 games and scored 7 goals.