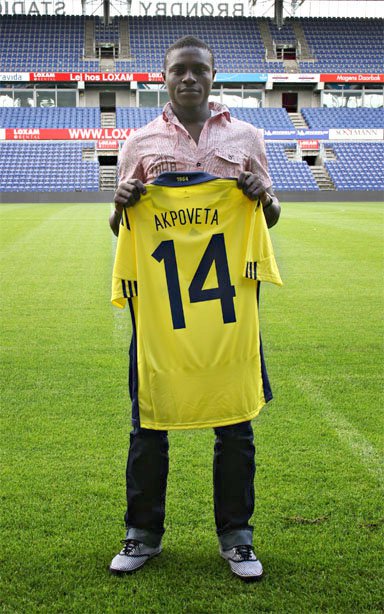 17 times, the 20-year Oke Akpoveta performed for Brondby. Eight times from the start and nine times as a substitute - a total of 649 minutes or the equivalent of a little more than seven full matches.

Yet the Nigerian is still searching for his first goal, but coach Auri Skarbalius started Akpoveta against Silkeborg on Sunday, and replaced him with the double goal scorer Simon Makienok after 46 minutes.

''It went well with Oke against Silkeborg in the cup, so we would give him at least a half more. Oke is very physical, can take the ball well for himself and threaten in depth, as Simon can not. So he started inside.  It was part of the plan. If they went up high, so fine, so Oke could threaten them, and if they allowed themselves to fall back, so we had Simon to set in,'' explains Skarbalius to bold.dk and continues:

''Generally speaking on Oke, he is a young player, and it goes up and down for young players. He could very well like to make a couple of goals, and a little more self-confidence will definitely get him to flourish, for he is physically very strong, he's fast, he can shoot with both feet, and he's just a really good boy.''

''He must of course be better to come in crucial situations, which means that he starts to score goals. But it is a matter of time, for he shows it in training and reserve team matches. You just have to remember that he is still young and has not played that much yet, if you look at the number of minutes. I think it is quite fair that he should have space and time to develop. At the same time, I realize that when you play in Brondby, then there is a requirement to deliver immediately. It's a balancing act, ''says BIF-trainer.

Akpoveta signed in the summer of 2011 a  four - year contract with Brondby, but tore almost immediately a cruciate ligament in the knee and was out almost a year.