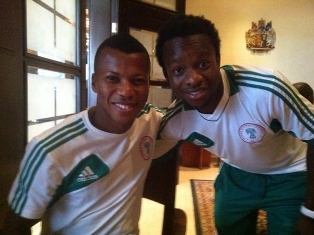 Lazio midfielder Eddy Onazi has dedicated his debut goal for Nigeria’s Super Eagles to God and Prophet T.B. Joshua, the man whose club for less privileged young footballers in Nigeria, ‘My People FC’, paved the way for Onazi’s rise to prominence.

Onazi, who currently plays for Italian cub SS Lazio, scored an injury time goal for Nigeria against their South American opponents Venezuela in an international friendly on Wednesday night, after a tap in from Ideye Brown and a wonder strike from Nosa Igiebor had given the Eagles a two goal advantage.

"My goal was made in heaven because my father Prophet T.B. Joshua told me I will score. He even gave me some tips on how to have a good game,'' Onazi told MTNFootball.com after the match. ''I therefore dedicate the goal to God Almighty and also to my daddy Prophet T.B. Joshua, who inspired me to score the goal. This goal will boost my confidence inother games as I believe more goals are coming, by God’s grace."

The match, which ended 3-1 in the African's favour, gave the Nigerian youngster a chance to prove his worth in lieu of the upcoming African Cup Of Nations Championship in South Africa. Many believe the teen’s impressive debut performance will have ensured him a place in Stephen Keshi’s squad.

''I’m happy at the manner the coach has been giving me opportunities and I can assure Nigerians that I will be part of the team that will bring the Nations Cup to the country next year,'' Onazi boldly declared.

The 19 year old's rise from a poverty-stricken home in the war-torn city of Jos, Plateau State to a regular in Lazio’s first team this season is nothing short of remarkable. After a promising performance at the U-17 World Cup in 2009, Onazi and his colleague Sani Emmanuel trialled at clubs around the world including European Champions Chelsea, before settling with
SS Lazio.

Rising through the ranks of the youth team, Onazi has burst into the first team this season, appearing for the Italians seven times already including four Europa League matches. His gutsy performances have already generated positive responses from players and critic’s alike and even premature comparison with Nigerian legend Sunny Oliseh.

Pastor T.B. Joshua is well known for his philanthropic activities, Forbes estimating he has spent up to $20m on humanitarian gestures in the last three years alone. My People FC, in the words of Joshua, is a club he set up to help the less privileged youth of the nation.

''I strongly believe the young shall grow.'' he said in an interview with Nigerian newspaper Complete Sport in 2009. ''They may not be there today, but the future of this country belongs to them. That is why those of us in the position to uplift them need to use every proper means to help them reach their future goals… God wants to raise these footballers to help the widows and become a benefactor to those who need their help in future.''

It is also not the first time Joshua has been cited as a positive influence to sporting success. In June this year, Nigerian boxer King Davidson said Joshua had predicted his WBO International light middleweight victory against Ghanaian Joseph Lamptey.

There was also widespread media coverage of Joshua’s apparent involvement with the Ghanaian U-20 World Cup victory
against Brazil in 2009, Coach Sellas Tetteh revealing that Joshua had given him prophetic insight during the course of the final match.