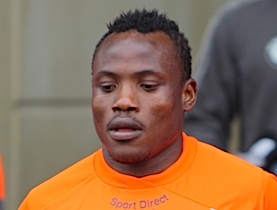 Vejle-Kolding, who pay the wages of Nigeria youth - teamer Sani Tahir, missed the chance of provisionally topping the Danish first division table on Sunday as they lost 0-1 to HB Koge.

Justice John Erhenede, who previously played for Vejle and Kolding, in his second appearance for HB Koge scored after 28 minutes.

The result means that HB Køge after three wins in a row are now in better contact with the top six, while VBK remains in fourth place, only two points behind log leaders Lyngby.