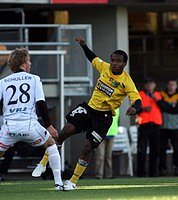 Former KuPS midfielder Raphael Udah hopes to relaunch his career with Al-Najaf FC. The 23 - year - old has put pen-to-paper on a one - season deal with the Iraqi Premier League outfit.

''I am now in Asia, have signed a contract with Al-Najaf until the end of the season. I did not extend my contract with KuPS when it expired because of personal reasons,'' Udah simply told allnigeriasoccer.com.

Clubs based in Kazakhstan and Turkey had expressed interest for Udah's services but did not back their interest with a concrete offer.

Al - Najaf are placed 10th on the Premier League table after four rounds.