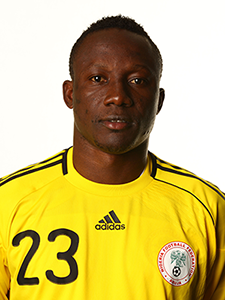 Out of favor Nigeria goalkeeper Dele Aiyenugba is seeking an exit from Bnei Yehuda due to his poor wages. The 29 - year - old, who was signed by the Israeli club as Vincent Enyeama's replacement, is in his sixth season with The Lions.

One.co.il published on Wednesday the annual wages of Aiyenugba. He takes a guaranteed $45,000 every year (approximately 17,000 Israeli new sheqels a month).

For every point Bnei Yehuda get in the championship, he earns an additional $760. After ten matches, Bnei Yehuda have amassed 16 points. So far, Aiyenugba has earned  $12,160.

This past summer, Aiyenugba penned a new two - year contract with  Bnei Yehuda. In future, he has ambitions of taking his trade to Western Europe, specifically France, where footballers are rewarded handsomely for their efforts.