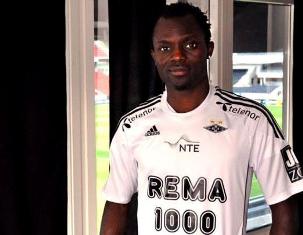 According to reports in Norway, John Chibuike, who missed Rosenborg's 4 - 1 away win over Hønefoss last weekend, is expected to make the line - up in Thursday's Europa League clash between his club and Austrian side Rapid Vienna.

''Rade Prica has injured foot, so therefore comes in John Chibuike,''coach Jan Jönsson was quoted as saying by aftenposten.no.

With only 3 points from 4 matches, RBK trail log leaders Bayer Leverkusen and Metalist by 7 points. Thus, they have been eliminated from the competition with 2 games left.

Based on the team's final preparations, coach Jan Jönsson will start the match with a flexible 4 - 4 -1 - 1 formation, with the versatile John Chibuike spearheading the attack.

John Chibuike missed the fourth round tie against Metalist due to a groin complaint.