...the complete Nigerian football portal
Subscribe
AKEEM AGBETU: It's Strange I Was On The Bench
Published: November 25, 2012 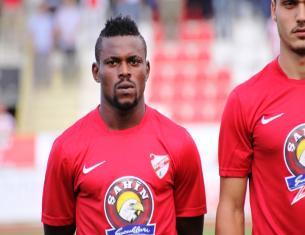 Former Nigeria youth - teamer Akeem Agbetu's team Boluspor traveled to the city of Urfa to play Sanliurfaspor in the Turkish TFF 1 League on Sunday and took away the three maximum points on offer, by defeating the home team 3 - 1.

Agbetu sat on the bench throughout the duration of the encounter, which corresponded to the 13th round of matches in Turkey's second  - tier.

''It is a mixed feeling, because I am happy we won. At the same time I want to play. In most teams I'v played for since the start of my professional career, I am always a starter. It's strange I was on the bench,'' lamented Agbetu to allnigeriasoccer.com.

The 24 - year- old attacker has made 8 appearances for Boluspor without scoring.