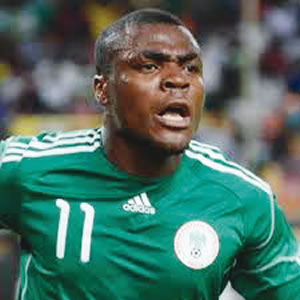 Turkish newspaper Hurriyet says prosecutors want Emmanuel Emenike jailed for between one to three years for his role in the match - fixing scandal during his spell with Karabükspor.

It would be recalled that Emenike refused to play the game against Fenerbahçe on May 8, 2011, citing injury, but club doctors said he could have honored the match if he had taken injections.

Few weeks after the incident, the 25 - year - old Super Eagle signed a contract with The Yellow Canaries, fueling speculations that he had reached an accord with the Fenerbahçe hierarchy to miss the vital game.

''The doctor who oversaw me at the hospital said there was no way I could play. Then I contacted the Nigerian national football team coach, and he told me that playing with an injection could threaten my career,'' he was quoted as saying by Hurriyet.

Meanwhile, Emenike's agent, Erdem Konyar, has stated that the career of the Nigeria international at Spartak Moscow is not at risk, as he has nothing to hide from the Turkish courts.

''Emenike is in Moscow and trained with the team. His career in Spartak is not threatened. We do not worry about a new trial on match-fixing. Emmanuel did not break any rule, so afraid of nothing. I will say more: he has nothing to hide, he always did his job honestly,'' Koyar told The News Russia.

This is not the first time Emenike is involved in a court case. In May 2011, he initiated and won a lawsuit against Turkish newspaper HaberTurk. The daily claimed Emenike had two different passports, and is nine years older than his official age of 25.