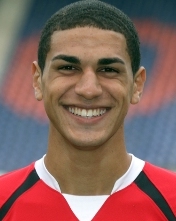 Against Eintracht Franfurt and champions Borussia Dortmund, Balogun was made to play at right - back, and he impressed with his strong tackling and ability to link between the midfield to attack. His favored position is central defense or man- marker.

Interviewed by German daily Bild, Balogun, who is called Barack Obama by teammates, is happy with his performances in the last two games in the Bundesliga.

''Just great to be able to do something. I have done well in the training and have played three league games on the account. A really good feeling! '' Balogun told Bild.

When questioned on the reason for omitting Balogun in earlier games, the Fortuna coach Norbert Meier defended his selection policy.

He told Bild: ''Leon did not perform well during the preparation, he knows that himself. But he has worked hard and that has paid off. With us, every player is needed, and this is not just a saying to keep the boys happy. "

24- year - old Balogun is eligible to play for the Super Eagles, but has not been contacted by the Nigeria Federation.