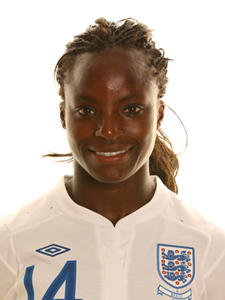 Chelsea Ladies have officially announced the signing of the Anglo - Nigerian striker Eniola Aluko, whose younger brother Sone plays for the Nigeria National Team. The duration and financial details of her contract were not disclosed by Chelsea.

The gaffer of Chelsea Ladies, Emma Hayes, is delighted with the capture of Eniola Aluko, who is joining the club from Birmingham Ladies.

Hayes told Chelsea's official website : ''Eniola brings a huge amount of knowledge into a young squad and a strong winning mentality. With her experience of the American game and international competitions, Eniola's a great addition for the team and one we're really looking forward to adding to the squad.''

She will join her new teammates for pre - season training in January.