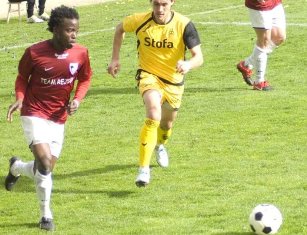 Yakubu Akilu is targeting a return to first team action when the Danish first division resumes from winter break in late March. The central midfielder has not played for Fredericia in the 2012- 2013 campaign due to injury.

''I have been injured for the past eight months, but I am getting better now. Was going to play the ball, then, I twisted my leg. I started rehabilitation a  month ago, training with the physios, balance training, and I have started running. By God's grace, sometime in January, I will return to full training,'' says Akilu to allnigeriasoccer.com.

The 23 - year - old has thanked the Fredericia hierarchy for the love they showed him when he was convalescing.

''The club took very good care of me, paid for the surgery I had at a private hospital in Vejle. Despite not playing, I was paid my full wages. So I am very grateful to them for their concern,'' Akilu added.

Fredericia signed Pierre Kanstrup from Brønshøj as replacement for Yakubu Akilu in the summer transfer market.

The former FC Ebedei talent is under contract with the Jutland based club until 2014. Before Akilu's injury setback, he was on the wishlist of teams in Russia and Germany.