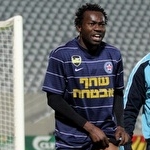 Shimon Edri, the coach of Israeli Ligat ha'Al side Hapoel Acre, has hinted that former Under 23 National Team invitee Fidelis Dimaku will make the starting line-up  in Sunday's game against Hapoel Tel Aviv.

Dimaku, who has made only 2 starts this season after 12 games in the championship, has been given the green-light by the coach due to his speed. His task tomorrow is not an easy one, to stop compatriot Toto Tamuz from scoring.

Hapoel Acre are desperate for points as they have not won in their last five games. They occupy the 10th position out of 14 teams in the Premier League.