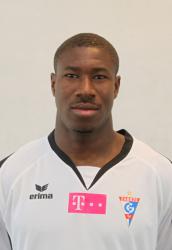 Coach of Burkina Faso, Paul Put, has named Poland based striker Préjuce Nakoulma in his preliminary squad for the 2013 African Cup of Nations in South Africa holding January 19 - February 10, 2013.

25 - year - old Préjuce Nakoulma plays for Górnik Zabrze in the Polish top flight. According to the official website of Trójkolorow, Burkina Faso start preparations for the tourney on January 3 in Ouagadougou.

Préjuce Nakoulma, a former teammate of Ugo Ukah at Widzew Lodz, participated at the 2012 edition of the Nations Cup, where he played two matches against Ivory Coast and Sudan.

It was the President of Burkina Faso, Blaise Compaoré, who mandated the Federation to take Préjuce Nakoulma to the 2012 African Cup.

President Campore, a big football fan, monitors the performances of foreign based professionals, and was impressed with Nakoulma's videos and at the last minute told the FA to include him in the squad.

He has recorded 2 goals in 8 appearances for Burkina Faso, who are in the same Afcon group with Nigeria.