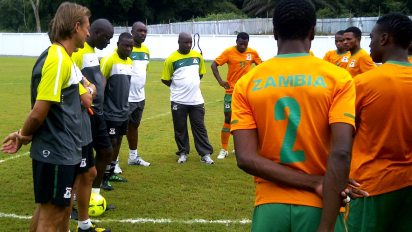 The Football Association of Zambia, FAZ has said the African Champions will play Swaziland in South Africa in an international friendly as one of the five build up matches for the next month’s African Cup of Nations.

FAZ Communications Manager Erick Mwanza also said that the friendly match against Namibia has been moved from Ndola and will now be played in South Africa on January 15, 2013, ten days after the Swaziland match.

Sandwiched between those ties will be two more high profile matches. On January 8, Zambia will go head to head with North African opposition and 4 days later, the Chris Katongo captained said will host European opposition at Levy Mwanawasa Stadium in Ndola in the form of Norway.

In those four matches coach Herve Renard will have his full strength squad unlike the friendly match against Tanzania in Dar El Saleem on December 22, 2012 in which the Frenchman has included a host of youngsters from the Zambian Super League for further assessment after they disappointed against Saudi Arabia last week in the 2-1 loss.

Meanwhile Renard and the two players nominated for CAF awards; Stopilla Sunzu and Rainford Kalaba will attend the Glo/CAF awards in Accra, Ghana. The gala will take place on 2oth December, 2012 and the trio will fly directly to Dar el Saleem ahead of the Tanzania friendly match.

After the match against the Taifa Stars, Renard will then announce his 26-man provisional squad.