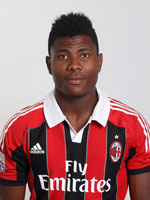 AC Milan rookie Ezekiel Henry was a super - sub for the Primavera squad as they defeated Roma 2- 0 in the first leg of the quarter-finals of the Tim Cup played on Saturday.

Henry failed to make the starting line  up as he had just recovered from a muscular injury. With Milan leading 1 - 0, coach Aldo Dolcetti introduced the former Flying Sport Academy ace on the hour mark to replace Petagna. And he repaid the faith of the gaffer by scoring Milan's second goal in the 87th minute.

Ganz had given the young Rossoneri the lead three minutes before the introduction of Ezekiel with a header. Another Flying Sport Acadamy product Favor Aniekan was an unused substitute.

The return leg of the Coppa Italia tie against Roma will be played on December 21.