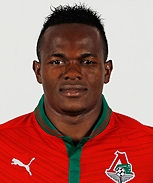 Out of favor Nigeria international Victor Obinna could return to play in the English Premier League, according to authoritative Russian portal championat.com.

West Ham, the club Obinna played for before signing a multi - year contract with Lokomotiv Moscow in the summer of 2011, are interested in having him on loan in the winter transfer market.

The 25 - year - old striker has netted twice in 17 appearances in the Russian Premier League this campaign.