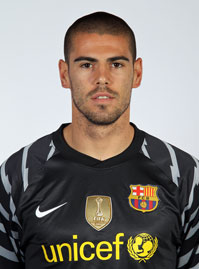 According to mundodeportivo.com, Barcelona and Catalonia goalkeeper Victor Valdes has been ruled out of tonight's clash against the Super Eagles of Nigeria after failing to recover from injury.

Nevertheless, coach Johan Cruyff has nine other Barcelona players in the squad including  Pique, Puyol, Xavi, Busquets, Jordi Alba and Sergio Garcia to consider for selection.

7 Espanyol players are also listed for the important clash which Eagles gaffer Stephen Keshi plans to use to fine-tune strategies for the African Cup of Nations.

The last time Catalonia met an African side (Tunisia), the star-studded team failed to score as the game ended in a goalless draw. And that result is the only blemish in Cruyff's spell as coach. In the other games he was in charge, Catalonia defeated Argentina 4-2 and walloped Honduras 4-0.

The Super Eagles could start the game with at least seven players from the domestic championship.