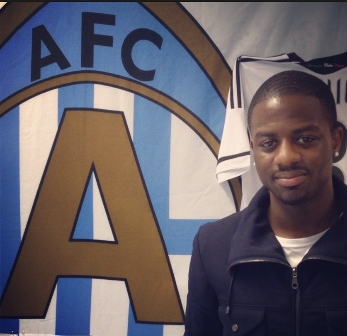 Former Everton trainee Femi Orenuga wants to use his move to Swedish club AFC United as a springboard to re-launch his football career.

It would be recalled that the 19 -year - old put pen-to-paper on a two - year deal with the Stockholm based club in November.

AFC United are getting ready for the start of the season which begins in April with an away game against Valsta Syrianska. Orenuga has admitted that the pre-season workouts have not been easy, different from his days in England.

''The first week of pre season has been pretty hard, speaking to some of my teammates they warned me about how intense pre season will be so I have prepared for it,'' Orenuga said.

Orenuga was once regarded as one of the brightest talents in English Football. Logically, eyebrows were raised when he left England and agreed terms with AFC United, arriving at the club as a free agent.

Nonetheless, he has been contact with some of his old Everton pals.

''I feel that Sweden is the step that will build up my profile and I'm sure I will be an achievement here. Yes, I have been in contact with Victor Anichebe, Seamus Colman and some of the staff who always keep in contact. Johan Hammer has warned me about the girls there,'' Orenuga laughed.

The hierarchy at AFC United has been busy in the transfer market in the off-season with quality additions to the squad including the former Nigeria youth-teamer Danny Uchechi. It is clear the intention of the club is to gain promotion to the Superettan at the end of the 2013 campaign.

''They have brought in a few players with class and their ambition is to get promoted which will happen. The new ones that have come in are doing very well Mathew, Jordan and Danny. I'm really looking forward to playing with them. Danny has also just had a little baby so congratulations to him,'' he said.

Speaking on his target for this coming season, Orenuga, who can play a variety of roles in midfield and attack said: ''The goal is for me to dominate this league and show everyone what I can do and my Lord will take care of the rest.

''I will be playing both right and left wing and will be coming in a lotto get amongst the goals. The manager has a lot of faith in me and he believes I can do a lot of damage in this league.''