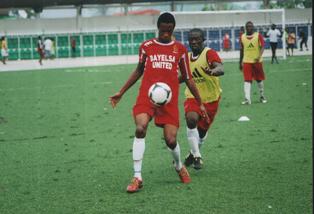 Okeji whose tally of 9 goals in his debut season for Gateway United in the NNL earned him an invitation to the Flying Eagles stressed that he will take that form to Bayelsa United.

He told allnigeriasoccer.com's Assurance Akhabue: ''Definitely, fans should expect more goals from me. I am not setting a personal target for myself, but I believe by the grace of God I will surpass the nine goals I scored for Gateway as we are playing 38 games in the NPL compared to 16 we played in the lower division.''

One of the rising stars in the domestic scene, Okeji was courted by 36 Lion and Akwa Starlet before pitching tent with Bayelsa United.