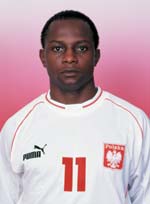 Former Poland striker Emmanuel Olisadebe has announced his retirement from football. The native of Nigeria last played for Veria in the Greece Super League.

'' It was too frustrating. I did not have a place in the starting eleven. So I said goodbye to the pitch, but not with the ball. I returned to Nigeria and am preparing for the role of coach. I recently had an interview with an exam coaching school in Lagos. Waiting for the results (laughs). If the answer is positive, I will soon start the one-year course as instructor,'' Olisadebe told Polish website Super Expressem.

When questioned on if he would love to handle any of the Polish teams, Olisadebe said: ''Who knows, maybe it will happen. Except that it is not easy to do coaching career in Europe. That's why I decided to go back to the roots, to Nigeria and I start. However, Poland is one of my options for the future. I'm also thinking of entering the world of business. Nigeria is a country of immense possibilities in this regard. We have 110 million people, but virtually no produce. Only consumption! Areas in which to work to change that, so it is a lot.''