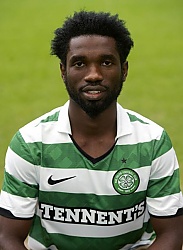 Kilmarnock new signing Rabiu Ibrahim did not impress at the Eagles training camp in Faro, Portugal and has been axed from the team by coach Stephen Keshi.

''Everything is good in camp, all players are in good spirit. The four players dropped took it in good faith because of the way coach did it.

"The way Keshi broke the news to the players was superb, he called the players affected aside after dinner, talked to them and told them they won’t be going to the AFCON but could still make it another time.

''We have 27 players in camp now and four more will be dropped tomorrow ,'' Eagles spokesman Ben Alaiya said.