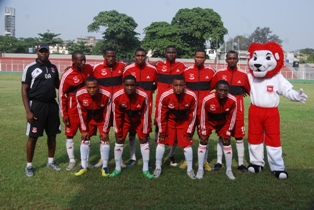 Ten men COD came from a goal down to humiliate Divine Warriors  3-1 in a NNL Week 3 game held at the Onikan Stadium.

The home team dictated the pace of the game in the first half by creating several scoring chances that were begging for conversion, before  Tiongoli capitalized on the porous defending from COD in the 44th when he looped the ball past the goalkeeper Segun Alabi to put the Warriors ahead.

Peter Abakpa who was a second half substitute equalized on the hour mark before Adoze and Adeworishe increased the tally to put the scoreline beyond the visitors reach .

He told allnigeriasoccer.com: '" I think I am going to address that now, I will read the riot act out to the players when we get to the training ground.   I have to let them know what is at stake because the season is long for the team to continue receiving red cards and this is not good for us. ''

Elsewhere Mighty Jets defeated JUTH FC 1-0 in a derby game to record the first away win in the National League this campaign.