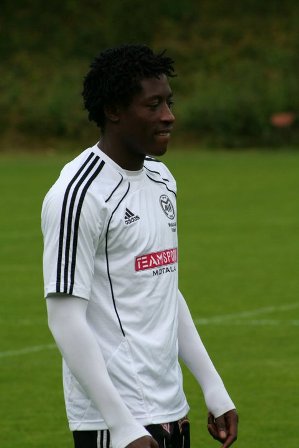 It has been confirmed that Mohammed Abdulrahman will play on loan for GAIS in the 2013 season.

Earlier tipped as one of the brightest talents in Sweden, his development was slowed down by a career threatening anterior cruciate ligament injury. But he is nearing full fitness and showed his credentials last season while on loan at IFK Värnamo, scoring 5 goals in 11 matches.

The 23 - year - old former Pepsi Academy player says he chose to join the Gothenburg side because he was not guaranteed match time at his parent club IF Elfsborg , who are the current champions of Sweden.

''Elfsborg is a big club with quality players. For five or six years, they had been fighting to win the league which they did last year. I don't think they have time for a player like me that is just returning from injury and I understand their point.

''I joined GAIS because I want to play, I know my qualities. After my performance last season, my confidence is back,'' Abdulrahman told allnigeriasoccer.com in a telephone conversation.

Mohammed Abdulrahman's contract with Elfsborg expires at the end of the 2013 season. An agreement was reached between Elfsborg and GAIS that he could be recalled from his loan deal prematurely.