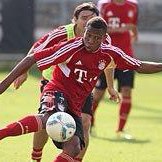 The precocious kid, who signed a four-and-a-half-year contract, was at the centre of transfer battle between the perennial champions Esperance and CA Bizerte.

Emerum, who also was on the cards of Bayern Munich, rejected CA Bizerte’s overtures on completion of his 18th year birthday, to put pen to paper for Esperance.

The former Vejle Academy player who was MVP and top scorer at the Aarhus, Denmark Football festival in 2010, is expected to replace Esperance striker Youssef Mskeni, who is set to quit the Blood and Gold in the January transfer window
.
''I chose to sign for Esperance because I believe they will bring me out to the world..

''It’s great signing for big club like Esperance and I hope I will get my chance to show what I can do,'' Emerum told National Mirror.