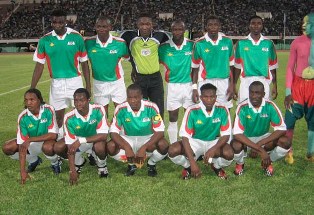 Burkina Faso are oozing with confidence ahead of the match against the Super Eagles. Led by Belgian coach Paul Put, The Stallions results in preparatory games have been encouraging.

Paul Put is without one of his most important players, the defensive all-rounder Charles Kabore, who is suspended for the tie against Nigeria. Based on the training sessions held before today's encounter, the coach will deploy a 4-4-2 formation.

In goal is the experienced Asante Kotoko goalkeeper Abdoulaye Soulama. The 33 - year - old is playing in his fifth African Cup of Nations. Paul Koulibaly (Dinamo Bucharest ) will man the central defense alongside Bakary Kone (Lyon). Panandétiguiri Mady (Antwerp) will operate from left back while Mohamed Koffi (Petrojet) will start at right back.

Monday's game could be won and lost in midfield. On paper, coach Put has opted for a four - man midfield with two wingers. In reality, the wingers can operate as dummy strikers if the team is on the offensive. It will be an interesting clash between Djakaridja Koné (Evian) and John Obi Mikel on which team controls the midfield. Florent Rouamba of Sheriff Tirasplo will assist Kone in midfield.  Wilfried Sanou (Kyoto Sanga) and Jonathan Pitroipa (Rennes) will operate from the right and left flank respectively.

Captain Moumouni Dagano will lead The Stallions charge for goals, with Germany based Aristide Bance playing as support striker.