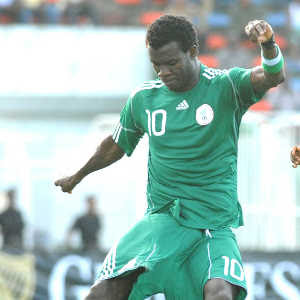 Real Betis midfielder Nosa Igiebor has failed to flourish at the ongoing African Cup of Nations. Against Zambia on Friday in the Eagles second group game, he had to be substituted for Obiora Nwankwo with 15 minutes of normal time left.

Nosa has reacted to the 1 - 1 draw against the defending champions. He tipped the Super Eagles to qualify for the knock out rounds and admitted that he's still adapting to coach Stephen Keshi's 4 - 3 - 3 formation.

''It's just to go out there in the last game against Ethiopia and do our best. But for sure we know we will qualify from this group. For sure, there is nothing to hide about that, it is not one of my best games. Maybe I was carried away or I lost the tactical discipline they wanted me to play, I was kind of confused a bit. I think we can always improve. Definitely as the competition progresses,I'll do better'' says Nosa to Brila FM.

Speaking on the penalty incident which gifted the Zambians an unlikely equalizer, Nosa said: ''That was not a penalty, for sure, we all know that. We don't know what happened to the referee, we can't tell. We just want to keep playing. ''

In conclusion, the former Warri Wolves ace has written off the chances of the Zambia National Team winning their second title in succession.

''Definitely I don't see the Zambians retaining the trophy. The coach has been talking tough even before the game. Look at the team, if not for the penalty........I don't think this team will qualify for the semi - finals of the African Nations Cup,'' he concluded.