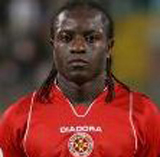 With just 24 hours left before the close of the January transfer window, Maltese Premier League side Floriana have completed the signing of Nigerian born striker Udo Nwoko.

He could make his debut against his former teammates Hibernians on Friday night, writes sportinmalta.com.

Another Nigerian player on the move in the Island Nation is Peter Taiye Oladotun, who has signed for First Division side Lija Athletic.

The 27 - year - old attacker made his debut for Lija Athletic last Wednesday in the cup game against Floriana.