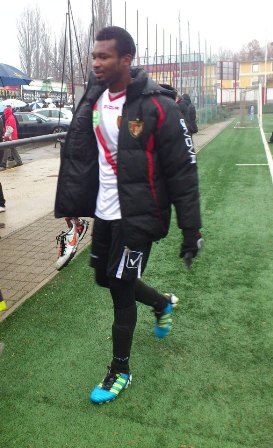 A groin injury had kept Hungary based midfielder Marshal Johnson on the sidelines for two months. And this limited his appearances in the championship to only 11 games.

Ahead of the resumption of the championship in the first week of March, Johnson,a former Nigeria B international, wants to battle his way into the first team and has targeted playing in Europe next season.

''I resumed training with the first team three weeks ago and have featured in two friendly matches. I am in good condition and ready to start playing games when the league resumes March 3rd.

''We are still competing in three cups - the championship, FA Cup and League Cup. We want to win one of those competitions especially the FA Cup to enable us qualify for Europe in the 2013 - 2014 season,'' Marshal Johnson told allnigeriasoccer.com.

Honved Budapest have on their payroll two other Nigerian players, former Golden Eaglets midfielder Henry Odia and George Ikenne. They are currently fifth in the championship.