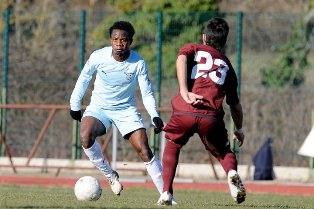 Last summer, Lazio coach Vladimir Petkovic fell in love with the qualities of Onazi after watching him play for the youth team of the Biancocelesti  and subsequently drafted the former My People FC midfielder into the first team.

Lalaziosiamonoi.it with reference to La Gazzetta Dello Sport quoted Keshi as saying: ''Dear Lazio, did you realize that you have the black Frank Lampard. It would have been madness to give up someone like him. Nigeria has had trouble staying at a certain level after the generation of Okocha, Oliseh and Finidi.Eddy has the qualities to progress well in the young team I have assembled in these two years. He is growing visibly and in less than two years can become one of the most important men of international football market.''

Stephen Keshi was part of the Nigeria squad at USA 1994 World Cup that was close to a famous  second - round victory against the Italians until Roberto Baggio struck just before the end of the match.

''We were stronger, but went home because the Italian football is full of tactics and discipline. Onazi has grown in that school,'' said Keshi to the Italian newspaper.