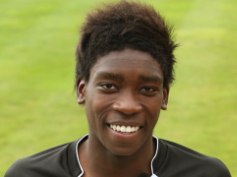 Anglo - Nigerian forward Sammy Ameobi could be unavailable for Newcastle against Metalist in the Europa League after suffering a hamstring injury in training on Monday, writes the Daily Mail.

Though the 20 - year - old has been treated by medics, he is in a race against time to play against the Ukrainian side on Thursday.

Sammy, younger brother of Super Eagle Shola Ameobi, made five appearances for Newcastle United in the group stage of the Europa League, but is still searching for his first goal in the competition.

The reverse fixture will be held in Kharkiv, Ukraine on Thursday, February 21.