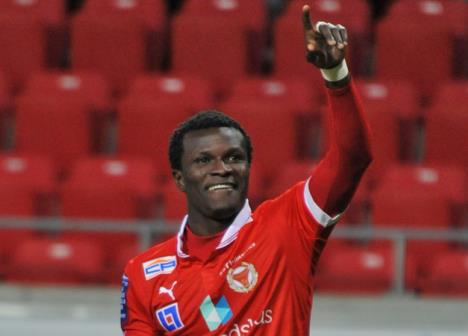 Last weekend, it was revealed that Abiola Dauda was on his way to Serbia to sign the dotted lines with Super Liga club Red Star Belgrade.

Dauda arrived Belgrade late on Monday and has completed his switch to the former European champions. After a routine medical examination, the 25 - year - old attacker penned a two - and - a - half - year contract with Red Star Belgrade.

''I had interest from clubs in Israel, Turkey, FC Zorya (Ukraine) and FC Ural (Russia) and some clubs in the Chinese League. But there was no offer on the table until Red Star Belgrade came into the picture. I did not waste time in accepting the proposal because I didn't know when I will get offers from other clubs.

''I am happy to play for Red Star Belgrade. It is a fantastic club with great history too. I am looking forward to training now and should be in shape before the start of the league later in the month ,'' Dauda told allnigeriasoccer.com.

Abiola Dauda will play with the number nine jersey for Red Star Belgrade, who are 2nd in the championship.