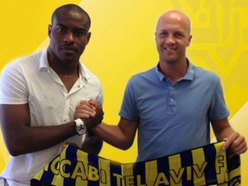 According to the official website of Maccabi Tel Aviv, Nigeria goalie Vincent Enyeama returned to Israel on Friday night and had his first training session with his teammates after more than one month of absence due to national team assignment with the Super Eagles.

The Yellows are preparing for the 23rd of matches in the Israeli championship against Bnei Yehuda this coming Monday. Enyeama received flowers from the club for winning the African Cup.

At this point, it is unknown if Enyeama would replace back-up goalie Barak Levi for the encounter at the Bloomfield Satdium, Tel Aviv.

Meanwhile, the other Nigerian at Maccabi Tel Aviv Kehinde Olanrewaju scored a last-gasp goal after 89th minutes in the 1 - 0 win over bitter rivals Hapoel Tel Aviv in the Youth League on Saturday.He was also on target last week against Hapoel Be'er Sheva.