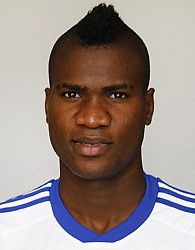 Brown Ideye has returned to Ukraine to team up with Dynamo Kiev, the striker himself announced on his Instagram profile on Sunday, informs dynamomania.com.

''Back to training," - Ideye wrote, adding a photo of himself in a Dynamo Kiev jersey.

Ideye, who was on target against Mali in the just concluded African Cup of Nations, traveled with the victorious Super Eagles to Abuja after the tournament in South Africa.He has now returned to Kiev, the Ukrainian capital.

The Ukrainian championship resumes in two weeks time, with Dynamo Kiev hosting Kryvbas. Before then, they travel to play Bordeaux in the Europa League this coming Thursday.