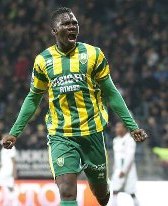 Kenneth Omeruo's stock has risen BIG TIME following his remarkable displays for the Nigeria selection at the African Cup of Nations, where he played six matches and relegated Super Eagles substantive captain Joseph Yobo to the bench.

Now, there is speculation regarding Omeruo's club future. Primarily a player of Chelsea, he was sent on loan last year to ADO Den Haag to garner first team experience. That loan agreement expires at the end of this season.

Top on the agenda of Omeruo for next season is to REMAIN with ADO Den Haag, where he is guaranteed first team football. The defender is not desperate  to make a return to Chelsea.

But should the European champions recall him from the Dutch club, he will seek a loan move to a mid table Premiership club.

Allnigeriasoccer.com can exclusively reveal that Belgian club Standard Liege are also in the running for the services of Kenneth Omeruo.

There has been contact between the leadership of The Reds and the Nigeria international. Recall that the Super Eagle did not make his debut for the first team before inking the Chelsea contract.

Kenneth Omeruo departed Nigeria for his base in Holland on Monday night. He is now available for selection when ADO travel to face Eredivisie powerhouse Ajax Amsterdam on Sunday.