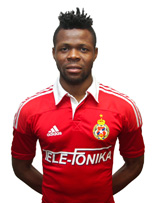 His acquisition cost the Polish club nothing as he was a free agent following his release by Waasland-Beveren last year.


Sarki, 25, has signed a contract with The White Star until the end of the season, with an option to extend if he impresses coach Tomasz Kulawik.

He had tested with Wisla Krakow and traveled with the squad for a training camp in Turkey, where he played all six friendlies.

Emmanuel Sarki has chosen to wear the number 15 jersey. All things being equal, he will make his league debut this coming Sunday against bottom team GKS BeĂ…‚chatów.