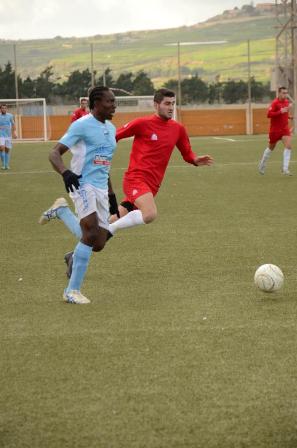 Maltese clubs Mosta and Floriana have already started preparations for reinforcements in the summer transfer market.

Both topflight teams have beamed their searchlights on the St George's striker Agboebina Osi Lucky, who has been impressive in the second division this season with 13 goals credited to him, including a memorable hat-trick against Mgarr United earlier this month, allnigeriasoccer.com can exclusively report.

In the January transfer window, Mosta had been looking for a replacement for their Nigerian talisman Obinna Obiefule, who left the club to pen a deal with Hibernians.

A proposal for the acquisition of Agboebina Osi Lucky was rejected by the St George's hierarchy as the 24 - year - old is very vital in their push for promotion.

Mosta have not put Agboebina's case in the drawer and will get him for nothing in the summer when he becomes a free agent. But they face genuine competition from the powerhouse of the Island nation Floriana.

A couple of First Division clubs including Naxxar Lions are also keeping tabs on the former Ojo Manchester United ace.