Exclusive: No Offers For Fegor Ogude 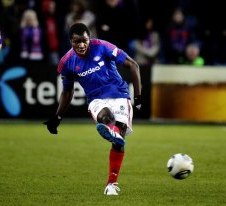 Contrary to trending reports, there are NO offers on the table for Super Eagles and Vålerenga midfielder Fegor Ogude, allnigeriasoccer.com can exclusively reveal.

It would be recalled that in July, 2012, the 25 - year - old former Warri Wolves skipper was substituted less than 10 minutes into the game against Odd Grenland after fracturing his foot.

Having not played an official game for Vif in the past seven months, Ogude has NOT been on the radar of teams in Europe.

But that situation could change when the Tippeligaen resumes next month, specifically March 16.

Ogude's contract with Vålerenga expires at the end of next season. The player is valued at a transfer fee of 1 million euros by this portal.

He is an interesting player to any potential suitor as he can cover multiple roles in defense and midfield.