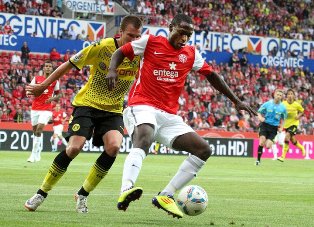 Finally, former Nigeria youth - teamer Anthony Ujah ended his three - month goal drought on Saturday after netting a brace in Cologne's 3 - 0 victory over Paderborn in the 25th round of games in the 2 Bundesliga.

Before this afternoon's tie, the 22 - year - old ex Lillestrom ace had not scored in his last 7 games in all competitions. To say the least, he was demoralized and had to take some lessons from manager Holger Stanislawski during the week.

After Anthony Ujah's first goal on 64 minutes, he ran straight to Stanislawski to show appreciation.

''He has helped me an awful lot this week, has a lot to talk to me. On the pitch, after training. Therefore, I wanted to thank him,'' Ujah was quoted as saying by express.de.

Meanwhile, immediately after the encounter at the RheinEnergieStadion , Ujah left for the hospital to undergo an x-ray. A player of Paderborn unintentionally stamped on his hand.