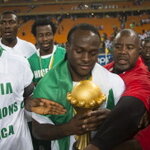 Nigerian winger Victor Moses has promised to do everything within his power for Chelsea to overcome Manchester United in the quarter -finals of the FA Cup.

''We just need to focus on each game as it comes from now until the end of the season. The game against United isn't going to be easy because they are a top side, but we'll be doing our best to go up there and win it.

''Winning the Africa Cup of Nations was a massive thing, both for the country and me personally, so I just want to carry on enjoying my football and hopefully winning trophies,'' Moses told the official website of Chelsea.

The Manchester United - Chelsea match will be played at Old Trafford on Sunday, March 10.