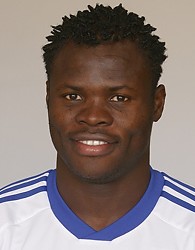 Dynamo Kiev wing- back Taye Taiwo has failed a late fitness test and misses the away game with Volyn on Sunday afternoon.

Taiwo had been undergoing individual training for most part of this week under the watchful eyes of the physiotherapists. Manager Oleg Blokhin has not named the 27 - year - old Super Eagle in his 18 - man squad that traveled to Lutsk on Saturday.

Lukman Haruna and Brown Ideye are amongst the players that flew to Rivne Kyivans .

This season, Taiwo, who is on loan from Italian powerhouse AC Milan, has made 13 appearances in the Ukrainian championship but the free-kick specialist is still searching for his first goal.

Dynamo Kiev are placed fourth in the championship. Though only 3 points separate them from a Champions League spot, they have earned 16 points fewer than champions Shakhtar Donetsk.